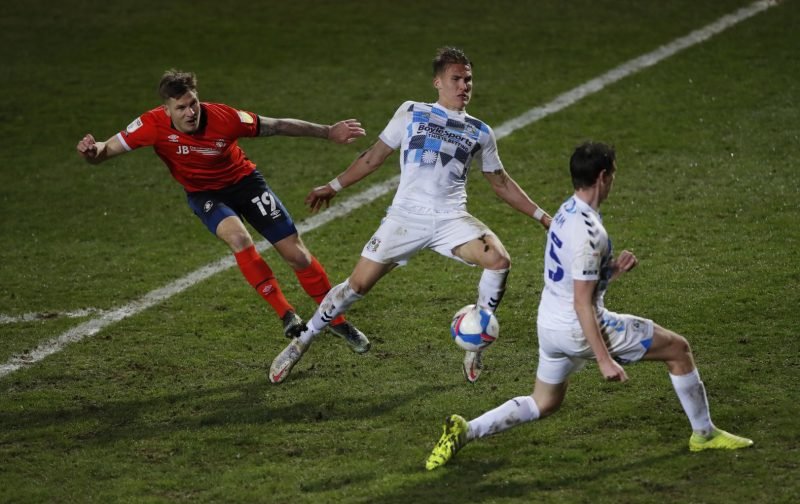 Yesterday, with the Championship fixture away to Wycombe Wanderers looming large on the horizon, we asked a pertinent question.

Following the two defeats over the Easter period, we asked – who-would-you-select-against-wycombe-a.

Our article prompted a decent response, and it was interesting to see that the majority of starting XI’s submitted contained the name of James Collins.

In recent fixtures, when it comes to the starting XI, the name of Collins has been conspicuous by its absence with the republic of Ireland international having started just 1 of the last 9 games, with Elijah Adebayo being preferred.

On the bench, once again, against Barnsley, Collins came on to score a decent goal and give the Hatters support hope that they could scramble a draw after being 2-0 down, unfortunately it was a false hope.

However, the 30-year-old who has scored 70 goals in 176 games, did receive praise from the boss with Nathan remarking, as reported by Luton Today

“He’s had to go through a tough time, had to swallow a bit of pride but he’s come out and reacted and done superbly well.”

Praise indeed and following the Barnsley game, comments left on social media seemed to want Collins back in the starting XI, as the following points illustrate:

Collo has to be back in the team, miss him and his energy so much

Collo in the team permanently please

It was also a view shared by a Barnsley supporter keen to praise the striker:

Why wouldn’t you start with Collins ?!? The front two offered you nothing today constantly offside. Connick and Collins always play well against us

But, whilst all the above would indicate that Collins should return to the starting XI in what will be a physical fixture against Wycombe Wanderers, not everyone is so sure, as the post left below, by Vital Luton Town reader Adam pointed out:

“Collins scores one goal and everyone thinks he should play? Never been a championship forward.”

So, let us put this one to the vote and we will see what the outcome is:

Would You Start James Collins Against Wycombe?

Luton – What To Do With Sam Nombe