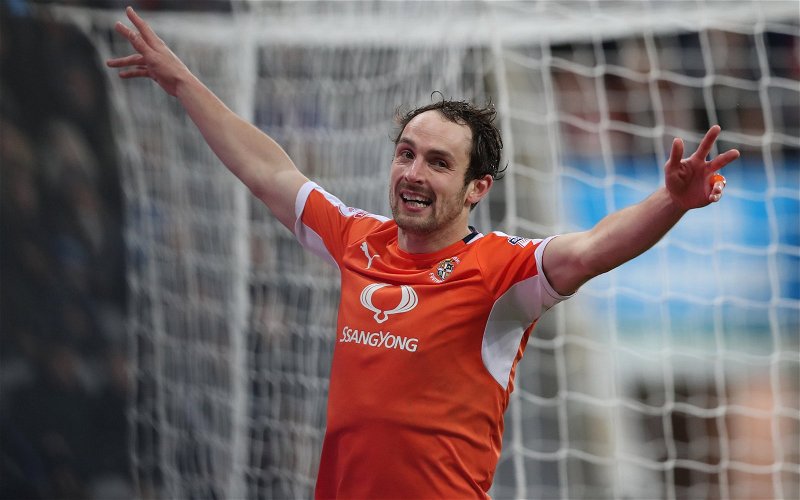 It does not seem that long ago, only a matter of days, that the opinion was split as to whether Danny Hylton still had a future at Kenilworth Road.

Our article – the-danny-hylton-conundrum – covered the fact that his injury record and a failure to score in the Championship indicated that he was not good enough for this division and several comments left, including the two below, from Hatter75 and Roby respectively, supported that view:

“Danny has given so much to LTFC but with him being rather injury prone and no longer a real contender for a championship place, his time has come.”

“He should have gone LONG ago. how much have his wages been for 2 crock filled seasons? probably somewhere at LEAST half a million if only on £5k a week!”

However, it appears that may not be the case.

In the build-up to the Blackburn Rovers game (a), this Saturday, the gaffer, Nathan Jones, has high hopes that the striker can / will play a part in the reminder of the Championship campaign this season.

Although Hylton last played for the Hatters on 20-February, against Stoke City and has not scored for Luton in his last 30 appearances, Jones feels his time to make a long-awaited impact, in the Championship, is coming.

Speaking at his pre-match press conference, ahead of the game, and as reported by Luton Today, Jones remarked about the 32-year-old:

“He’s missed a little bit of pre-season because we were building him up and then unfortunately, he got Covid and he caught it quite badly, so that curtailed him for near enough three to four weeks.

“But he’s in training, doing well, so I’m looking forward to hopefully Danny really impacting for us.”

The fact that Danny has recovered from the illness is great to hear but is Nathan right about the striker making an impact in the Championship?

Well Nathan believes he is, further adding when pushed on his belief:

“Absolutely, before he had his injury problems, Danny was a Championship striker playing in League Two and League One, I’m absolutely convinced of that.

“You look at the performances he was putting in against Newcastle on a regular basis, he was outstanding, so there’s a Championship striker there, it’s just about getting rhythm.

“He played against Leeds for us, and he was outstanding, led the line fantastically well against the best team in the league.

“So Danny Hylton is a Championship striker, it’s just about getting rhythm and getting him over certain things he’s had.

But if that is the case, where does Danny stand in the pecking order?

Surely Adebayo is the first choice but who is next, would it be Jerome or Hylton?

And if Nathan was so sure Hylton would recover from injury and come good, why was Jerome added to the squad this summer?

Being a striker is all about confidence, Hylton is not going to come straight into the team and score a hatful, it will be a progressive matter, one goal may lead to a run but, equally, a barren spell could see him side-lined again.

But, continuing, seems that Hylton will be given that chance with Jones further adding:

As for my opinion, I am still not convinced that Hylton will get that many starts or that he is Championship class, perhaps a harsh view but I would be delighted if I were to be proven wrong.

What are your feelings on the above topic?

Please feel free to leave your view in the comment facility beneath this article.