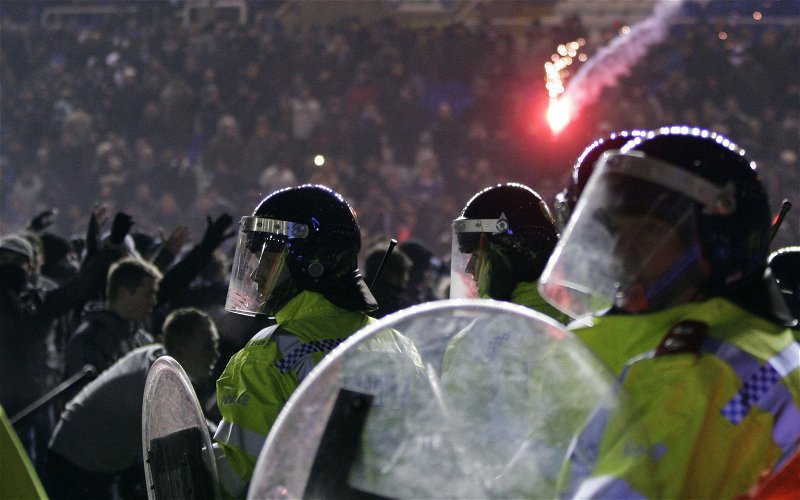 As I mentioned in a previous article, I didn’t have a ticket for the game against Fulham, I had to be content with watching it on Sky Sports.

But, following the game, several of my acquaintances pointed out that the Luton support had been the victims of heavy-handed policing from both the officers of the law and the stewards.

It seems that numerous innocent parties were ejected from the ground, almost as if a warning shot was being fired across the bows of the travelling support.

The reports have also reached Kenilworth Road with the club set to make representations about how the support was treated – Official Site – Statement.

“As has been reported and indeed witnessed by fellow supporters, members of our Club staff and Club stewards who were invited to attend the game, for children and senior supporters to be stewarded so aggressively, is disappointing and unacceptable.”

I saw a chap and a young boy who looked about 9 being taken into the toilets at half time after being pepper sprayed by police!

But reports of over enthusiastic policing brought back a memory from the 1976/1977 season.

As a young 16-year-old, I’d convinced my parents that it would be safe to take my younger brother and his best mate, to Fulham for a Hatters match, with the duo both being 13 years of age.

Travelling on the official coaches, we made our way into the ground and took our places, among the support, on the open away terrace.

When the Hatters took the lead, through a John Aston goal, we all duly celebrated.

But when the celebrations died down, I turned around to see my brother and his friend being led away by a group of policemen, manhandling them down the steps.

On inquiring what they had done, I was met with a wall of silence.

Not sure what to do, I opted to wait until the end of the game.

On leaving the ground the duo were waiting by the coach, looking a bit sheepish.

Asking what had happened, I was told they had been ejected for ‘jumping up and down’ when Luton scored and had been, outside the ground, threatened by a group of Chelsea supporters who had also vandalised one of the coaches.

Getting home, it was agreed we’d not mention the incident to anyone, but it’s nice to know that in 46 years nothing seems to have changed much down Fulham and Putney way!

Luton – A Debut From Hell