Luton back to winning ways 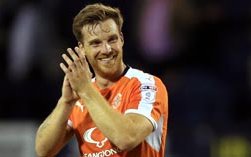 Unbelievably, Luton missed from the penalty spot on three occasions yet still came out on top by 2-0 against an in form Mansfield side arriving on the back of 4-0 and 5-0 victories.

The 1st penalty incident resulted in a save and retake, also saved, and a fracas that saw the visitors’ skipper red carded and the manager sent to the stands shortly afterwards.

Luton had signed Amari Morgan-Smith earlier in the day and he was a shock starter for the Hatters. Atieno’s red card at Gateshead had been rescinded but he began on the bench, alongside the rested/dropped Shane Blackett.

It was change all round, with skipper Pilkington reverting to centre back, Howells in the centre of midfield, Crow starting alongside MBH and Gleeson in at right back at the expense of Adam Newton.

The early exchanges were tentative but referee Cook was a little over officious in handing out Yellow cards to Keane for the Hatters and Sandwith for the visitors both for innocuous offences.

The problem for such referees is that, if they set their assessment of what is a yellow card offence too low, then they have nowhere to go in a physical encounter because, in the interests of consistency, they end up with an unnecessarily high number of bookings and sendings off.

This said, when Sandwith fouled Claude Gnakpa minutes later, an offence far worse than either of the two earlier bookings, he failed to be consistent and show a second yellow card, which lost him his credibility for the remainder of the match, with disastrous consequences for his control.

On the quarter hour, Matthew Barnes-Homer found Crow, who played in Gnakpa superbly, but with only keeper Marriott to beat, the Frenchman hit it straight at him and slid the rebound wide.

A few minutes later, Crow should have opened his League account for the Hatters, but dwelt on the ball too long and the ball got caught under his foot and his shot bobbled wide.

Danny Crow was obviously trying to make a point with Town Boss Richard Money, because he was showing plenty of skill, speed and effort and another effort from him from way out nearly lobbed the keeper.

Mansfield were showing none of the attacking flair that had seen them net 9 goals without reply in their previous two matches and Luton turned the screw as the half wore on.

The ideal opportunity to take the lead arrived with the award of a penalty kick after Keane’s free kick had been headed by Kroca and the hapless Mills saw the ball cannon off his arm. To be fair, I would have been irate if it had have been awarded against us in our box, because the poor defender had no intention to control the ball, as it arrived on him at some speed with no time to get out of the way, a clear case of ball to arm.

There then followed some moments of absolute madness akin to the penalty debacle involving Steve Howard at York City a few seasons back.

Claude Gnakpa, who must be way down the list of penalty takers, for some reason thought that he had the right to take it and clung on to the ball like a limpet, despite protests by Crow and MBH. They became fed up arguing with him and Gnakpa put the ball on the spot and hit it less than firmly to the keeper’s left. Marriott was down to it and beat it away, but the referee had seen some encroachment and made his mark by awarding a retake.

Mansfield skipper, Foster, took exception to the decision and gave the referee the benefit of his wisdom on the matter and was yellow carded for dissent.

Whether Claude’s bottle had gone or whether it was Crow’s speed in collecting the ball, I don’t know, but the former Cambridge man stepped up and hit the retake in the same spot as Gnakpa’s attempt, and Marriott duplicated the save. Ironically, there was further encroachment, but Mr Cook chose to ignore it on this occasion. The ball went towards the corner flag and MBH was the first to react and chased after it. What caused the contretemps that followed, I couldn’t see from the main stand, because everyone had stood up to try to see what was happening resulting in no one seeing!

All I saw was virtually all the players pushing and shoving and as order began to return the referee cautioned Foster again and then followed the second yellow card with the inevitable red one. Foster’s reluctance to accept it and his delay in leaving the field of play will no doubt be the subject of a further report by the referee!

MBH was also yellow carded for his involvement in the pantomime.

Just as it appeared that order had been restored Mr Cook’s attention was drawn to the away dugout and he strode over and had a short ‘conversation’ with Stags’ manager Holdsworth culminating in his being sent to the stands, and he went waving his arms about and shouting expletives and the half was swiftly brought to an end.

In further unbelievable links in the chain of events, the second half was only seconds old, only 10 or 20 seconds in fact, when Gnakpa turned past Sandwith, who brought him down for another penalty kick to the Town. Bearing in mind Sandwith’s yellow card early on and his let off with the second hefty foul, surely he deserved a second yellow for this foul? Not in the eyes of Mr Cook, who perhaps did not want to court even more controversy than he had already done!

Matthew Barnes-Homer, who scored two out of two penalties in his hat trick earlier in the season stepped up for this one, having been handed the ball by Crow ……….. and blasted it way over the bar for the third penalty miss of the match. Well at least Marriott didn’t save it!

With the away fans taunting the home fans over this further miss, the home crowd began to get on the Hatters’ backs, but on 50 minutes a clever short corner routine between Keane and Howells fed the ball to Crow who hit the ball sweetly and securely into the net from just inside the box.

With one goal came a second shortly afterwards, when Mansfield’s man of the match, keeper Marriott, at last made a mistake. A disputed free kick came into the box from Keane, and under pressure Marriott opted to punch the ball and it fell straight to new boy Amari Morgan-Smith who placed the ball between defenders on the line and into the net from the edge of the penalty area. It was no more than the Town deserved because Mansfield had been truly awful and Luton had created a number of chances, as usual, and again as usual, squandered them.

Within five minutes of the 2-0 lead being established, Medley went over the outstretched leg of Gleeson in the Luton box, but was clearly ‘looking for it’ and everyone thought the somewhat inept referee had bought it when he blew his whistle loudly. However, he had seen the incident as I did and gave Medley a yellow card for simulation, which was nice!

AMS was badly fouled near the corner flag by Mills who was lucky to see only yellow for it and the match looked won.

There were a few minor chances as the game petered out, but Luton had really settled for the 2-0 well before the final whistle, and Mansfield looked as though they probably had too!

New boy Amari Morgan-Smith looked a handful all evening and seems to be a very good acquisition.

We are all different - I'm not!